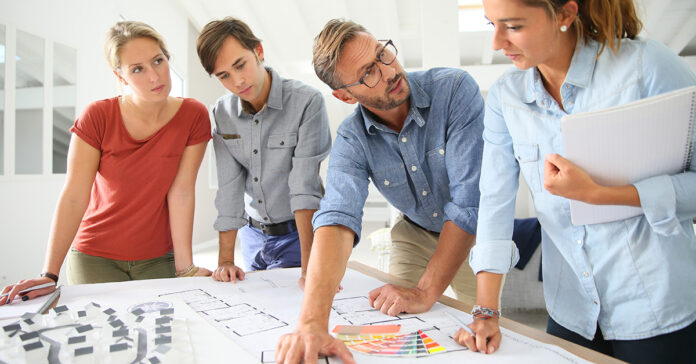 It’s also important to color each system a different color, as this will help you quickly identify a system by its equivalent color code. For example; Low Pressure Supply Air would always be colored light blue, while return air would be colored orange. By following this simple rule of coloring from one drawing to the next, it will make it easy to view drawings using a visual representation of system types.

These are the standard colors we will be using through-out this training. It is also helpful for those that may not be familiar with your color coding, to put a legend on the drawing as shown in the picture below.

Computer estimating programs also use different colors to represent different portions and system types in a material take-off. Your company should establish a standard that everyone uses in order to maintain consistency. After a while you can instantly recognize a system based on the colors that were used during takeoff as we’ll show you below.

Begin your takeoff at the source of the air, which is often a main duct coming out of a shaft as shown below for this VAV high-side supply duct in a commercial HVAC system. It’s not actually seeing high static pressure, but the nomenclature is used to distinguish the low side from the high-side of the VAV terminal box. The specifications will define the static pressure to be used at various location in the duct system.

The duct will act as a transportation highway bringing toxic smoke that may occur from a fire on another floor through the shaft, so it is important to be aware of the requirements for smoke and fire dampers. We also know that a Smoke or Fire Damper will need an access door in the duct and another in the ceiling if the ceiling is constructed of inaccessible material like gypsum board.

In this example we will take off all of the High-side VAV Supply main duct and color it pink to indicate the high pressure side. Of course, most likely it’s not high pressure ductwork,  but can be anything from +2” sp to + 6” sp. We use this terminology only to distinguish the upstream from the downstream side of the VAV box.

As you can see in the drawing it’s easy to now identify where the high-side supply air duct main runs through-out the building.

When we have finished with the High-side main duct we will color all of the VAV Terminal Units or VAV Boxes with a yellow highlighter. You could also do this in the beginning, while counting how many VAV boxes there are.

This will help us quickly visualize the demarcation between high-side and low-side. The VAV box separates the two pressure classes as often defined by Engineers and the static pressure requirements as seen by the duct.

After completing the high and low pressure duct takeoff then proceed to the return air system. In this example the return air is not ducted back to the air handler, it is returned through the attic space un-ducted.

What the engineer has shown is sound boots in each office or space so that noise is not transmitted from one office to another through the return air grilles. In this case it appears that each office space has full height walls that would trap any return air, so a means for getting out of the space is required.

It should now be easy to spot anything that was missed. You will notice any white areas of the drawing that haven’t been colored that may contain a piece of duct.

When doing manual takeoffs without the benefit of a computer program, you should use preprinted forms or a computer spreadsheet to tally your material takeoff.

The most common fittings are shown on the takeoff sheet. You can rename any of the fittings that you commonly use in your area. The idea is to make takeoff’s as easy as possible without duplicating efforts.

A sheet metal takeoff needs to be properly broken down so as to allow for easy labor analysis when you are complete. To do this, you will need to separate ductwork according size ranges that use similar productivity factors, such as is shown in this replication of the Military’s productivity schedule.

As can be seen in the chart above, the sizes are broken down into ranges based on the full perimeter of the ductwork. The perimeter is the same as the stretch-out we discussed in a previous section. If you have a 24” x 12” section of ductwork, then the perimeter (stretch-out) would be as follows;

This would fall on the first line of the chart for rectangular ductwork.

When doing a sheet metal takeoff, it’s helpful to separate the takeoff according to the following;

By breaking out your takeoff in a structured way like this, it makes it easy for labor analysis and addendum modifications. Your takeoff might be organized as follows;

If a week later an addendum was issued that changed the ductwork on AC-5, this would be an easy change for you since you have isolated it within your takeoff.

It’s best to start at the source of the air being provided into the duct. This could include an Air Handler, Air Conditioner, Fan or just the most upstream section of the ductwork, where it is at its largest dimension and CFM capacity.

For this estimating review meeting, be sure to have copies of the labor reports for all those who will be attending, along with a copy of the sheet metal specialties sheet. Be organized and professional at all times, this is where you establish your credibility as an estimator, by the way in which you present yourself and your estimate.

Some companies will establish threshold for sign-offs of the estimate based on the dollar amount of the bid. For project greater than a million dollars, maybe your estimating standards would require that the bid be reviewed and signed by an executive of the company. The more difficult the project, the more you want to get an experienced opinion of others.

When a project is successfully won and the project documents have been handed over to the construction department, there should be some form of project kickoff meeting. During this meeting the estimating team or individual estimator would explain the approach to the estimate and the values of the estimate.

At this point in the process, the estimator is usually the one most intimate with the project scope and details, so is one of the best to communicate all the information about the project. The project kickoff meeting will ensure that key information is transferred to the team that will be responsible for building the project.

It’s also good to have some form of project closeout meeting, or lessons learned feedback so that anything of significance learned while executing the construction of the project can be shared with the estimators or estimating department to make them more efficient in future estimates.

Acknowledging where the estimate went over or under the estimated amount will help to make future adjustment in labor or material values as required to bring each category of the estimate in alignment with the actual cost. Realizing that labor is always going to be the biggest variable, this is an area for continuous study to better understand how your company performs in various environments and conditions.

Double checking your calculations and having a second set of eyes review the bid and proposal will help eliminate possible errors. Your company should have some measure of ensuring the accuracy of your bids. This can be by using estimating software, bid review meetings or several people reviewing the bid and proposal for projects exceeding a certain dollar value.

Establish estimating standards for your company so that as you grow there will be a way to have all your estimates uniformly arranged. This will make it easier and quicker to review and audit estimates.

What is IPLV (Integrated Part Load Values)? It is based on part load chiller efficiency values. The IPLV is calculated on the...
Read more
Business

What  is a bid Bond? Basically when you’re bidding a project that requires a bid bond it’s because the...
Read more
Education

What is IPLV (Integrated Part Load Values)? It is based on part load chiller efficiency values. The IPLV is calculated on the...
Read more

What  is a bid Bond? Basically when you’re bidding a project that requires a bid bond it’s because the...
Read more

If you are looking for Construction Estimating Software, the choices are many. I have personally been involved in overseeing an estimating group...
Read more
Load more

If you are looking for Construction Estimating Software, the choices are many. I have personally been involved in overseeing an estimating group...
Read more

Labor Databases A labor database contains units of labor for each task that is required for a particular project....
Read more

What  is a bid Bond? Basically when you’re bidding a project that requires a bid bond it’s because the...
Read more

If you are looking for Construction Estimating Software, the choices are many. I have personally been involved in overseeing an estimating group...
Read more

Chapter #8 - Estimating Summary Sheet We will use the MEP Academy Estimating Spreadsheet for all our examples....
Read more